or order the printed book:

Whatever faith you may have, this information will show you the World Order as it really is, and how far back in time the rabbit-hole goes.

NIMRODOLOGY - Training In Rebellion
The misunderstandings of critical terms by the teachers of Nimrodology are the source of our errors.
What was it exactly that was "nailed to the stake?" http://www.fossilizedcustoms.com/CHEIROGRAPHON.html

ORIGIN OF THE WORD CHRISTIAN

The term Christian was used by the Greek culture several hundred years before Yahusha’s birth in Bethlehem.

Rome (Italy) and Alexandria (Egypt) were the western world’s primary repositories of knowledge.

A merger of ancient Egyptian, Greek, and Roman cultures took place from 300 BCE to 200 CE, and Christianity emerged from it.

The Greek deity Serapis replaced Osiris as the consort of Isis, and the devotees of this deity were called “Christians.”

Hadrian (Roman emperor 117 to 138) built the Pantheon (temple to all gods) using concrete to form the world’s largest domed structure (domes are a pagan design).

He wrote that Serapis and IESU were the same deity.

This is syncretism, and when it catches on, it becomes tradition. People serve traditions with ferocious zeal.

Confusion and syncretism between pagan cultures at Rome and Alexandria continued into the 4th century CE.

The Alexandrian cult, or church fathers, worked feverishly to synthesize paganism with the Messianic movement, hatching their brand under the Serapis’ followers name, Christians, who occupied the city for centuries before them.

We guard (shamar) the Name and the Word.

To the Greeks, the impaled Mashiak is foolishness (1 Cor. 1:23), so the Greek term “xpristianos” (meaning idiot) seemed appropriate to them.

The Greek term CHRISTIANOS in that day was a term foisted on them, causing suffering as Peter writes about it at 1 Peter 4:15-16.  No one would ever want to be labeled a murderer, thief, doer of evil, or meddler.

Nor would they wish to be known as an idiot or “cretin.” Look at the context of this rarely-used term, christianos:

“For do not let any of you suffer as a murderer,

or thief, or doer of evil, or as a meddler.

But if (one suffers) as a xpistianos, let him not be ashamed, but let him esteem Alahim in this matter.”

Some say the word xpistianos should be used only as an adjective: “Christian faith.”

But in truth, it became used as a pronoun to denigrate and shame the Natsarim.

It was a term of contempt and scorn.

If you look up the origin of the word cretin, you’ll see the Greek source is xpistianos.

We should never call one another such a term. It means an idiot, but revisionism has caused mass-amnesia.

Please Google the term CRETIN, and learn the truth. 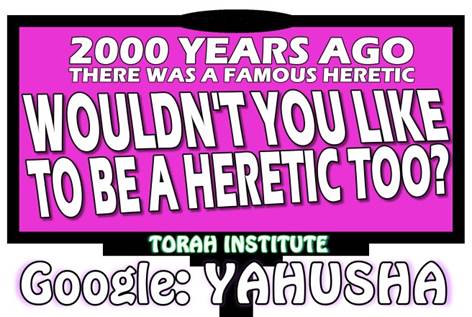 2000 years ago, Yahusha was a heretic to the establishment.

Being "legal" is thought of as a negative sentiment in the mouth of today's religious leadership.
Usually the term "legalist" is a way of dismissing those who seek to obey the will of Yahuah as it is written.

The term “legalist” is used as a synonym for "heretic."

Obedience proves our faith, and when our faith is perfected in such a way that we are being "legal" in Yahuah's eyes, He knows by our active obedience that we love Him. One cannot prove their commitment to Yahuah by being illegal, and having no plan to become legal, and show improvement in that direction.

2 Peter 1 advises us to increase in our uprightness, and thereby do our utmost in making firm our calling.
The Pharisees were fakers, and obeyed the traditions of men rather than seek to obey Yahuah from their hearts.

Yahusha was never upset at them for being legal and obeying Torah, but rather for substituting the traditions of men in place of obeying Yahuah - exactly where we find ourselves today with the illegalists in Christian leadership.

Church tradition, not Torah, is their focus.

Obeying is worship, so they worship tradition.

They want our tithe, but they don’t teach the righteousness of Yahuah, His Ten Commandments.
We are ambassadors of the coming reign of Yahusha, and very much seek to be the greatest legalists of all as we purify our walk and wait for the coming of our Master. We're ironing the wrinkles out of our wedding garments, and trimming our lamps with the extra oil He is pouring into our hearts - the wisdom of the five wise virgins is knowing what is pleasing to Him.

We beg, be restored to favor with Yahuah;

He is coming sooner than you expect.

“So Yahusha said to those Yahudim who believed Him, 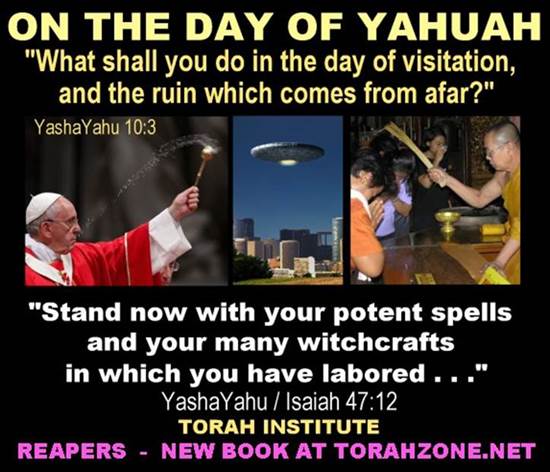 The belief that Yahuah, Who wrote the Torah, sent His Son to abolish the Torah, is illogical.

A young boy once slew a giant with a stone in the Name of Yahuah.

One Name will take down the reign of Babel.

One Name seals us for the Day of Redemption.

Every car is a kind of BILLBOARD that can tell people something very important.

Harvest workers, place this message at the top of your car's rear window:

Google: YAHUSHA  - Babel will fall when this Name strikes its feet and toes. 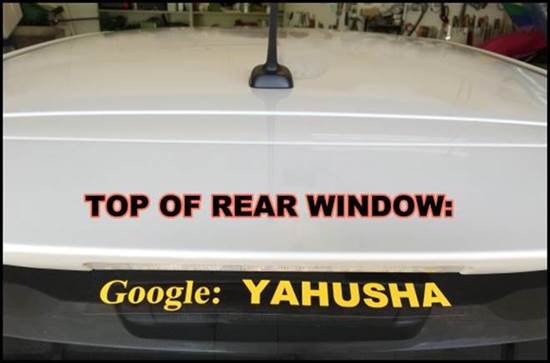 Remember the Torah of Mosheh is the message of AliYahu for the last days.

It will program us to behave in love toward Yahuah and our fellow human beings.

Here is the essential training in how to love, the instructions to live by: 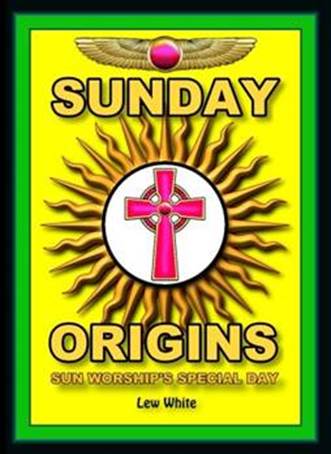 The new Fossilized Customs 12th edition eBook is live – the printed version should be available by 4-15-2015.

Click on above photo to “Look Inside” the new book. 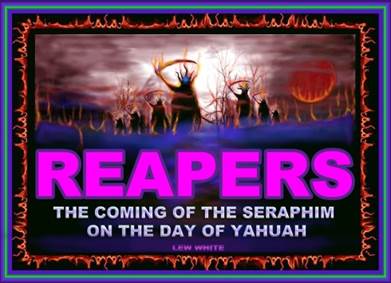 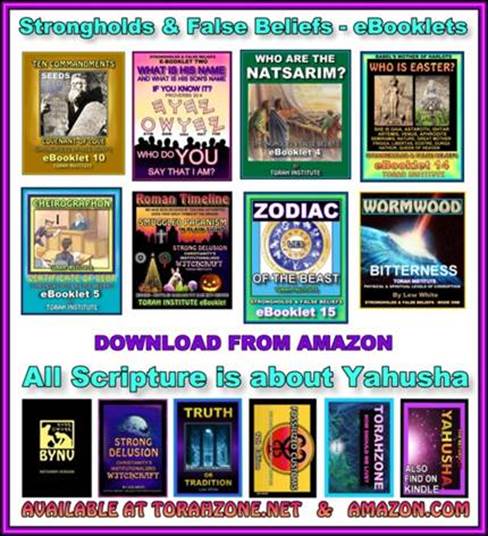 SUNDAY ORIGINS - the eBook is available at www.torahzone.net & Amazon Kindle

We’re working on a new eBook: CONSTANTINE: OUR HERITAGE

Imagine finding a 5” x 7” card in your newspaper bin that looked like this: 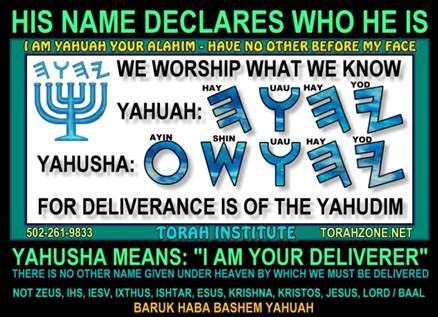 Order a stack of them to distribute to those in the street corners and hedges.

“And the master said to the servant,

‘Go out into the street corners and hedges, and compel them to come in, so that my house is filled.’”

“Yahuah is my shepherd; nothing do I need. He makes me to lie down in green pastures; He leads me beside still mayim. He returns my breath; He leads me in paths of uprightness For His Name’s sake. When I walk through the valley of the shadow of death, I fear no evil. For You are with me; Your rod and Your staff, they comfort me. You spread before me a table in the face of my enemies; You have anointed my head with oil; my cup overflows. Only goodness and lovingkindness follow me all the Yomim of my life; And I shall dwell in the House of Yahuah, for the duration of Yomim!

His rod is a goad, poking us as we walk along. It keeps going straight ahead as He says, “This is the way, walk in it.”

His staff protects us as He uses it to repel lions, bears, and wolves that attack His treasured possession.

We are His inheritance, and He is ours. “I am my Beloved’s, and my Beloved in mine.”

He is coming to reign, so learn His Name – YAHUSHA. The reign of Babel is about to fall.